We will be collect your testimony at Public Hearings on the Chicago Riots of 2022, set to begin on July 22, 2023. The hearings will continue until all testimony has been taken. If your business was looted during the riots or you are a victim of Chicago crime, RSVP here by signing your name below to attend the Chicago hearings or to testify. Event details will be sent with RSVP.  You can also make a donation of any amount to support our organization’s costs in underwriting this important event.

I want to attend or testify at the Chicago Riot Hearings

Latest Signatures
– display signature list
9 – display signature count
500 – display signature goal
I want to attend or testify at the Chicago Riot Hearings – display petition title
Out-of-control violent crime has destroyed Chicago. Murderers and rapists have been set free on low or no bail. Carjackers aren\’t being prosecuted. Retailers are fleeing the once Magnificent Mile because Chicago\’s laws allow thieves to steal $1,000 per day. Victims are being completely ignored. At the heart of these crimes is the untold story of the 2020 Chicago Riots which normalized murder, looting and vandalism. Has anyone been held accountable for the mass looting, rioting and murders in the wake of the George Floyd protest, triggered by Black Lives Matter organizers? Who has been arrested or prosecuted? Who are the victims? What did Chicago retailers experience? What has this cost Chicagoans? What is the state of violent crime in Chicago now? Is Mayor Lightfoot manipulating the stats on shootings and murders to position herself for re-election despite the harm she has caused? We will be collecting your testimony on all of these questions and more at the #ChicagoRiotHearings to be held on August 6, 2022. RSVP here by signing your name below to attend the hearings or to testify. Event details will be sent with RSVP. – display petition message 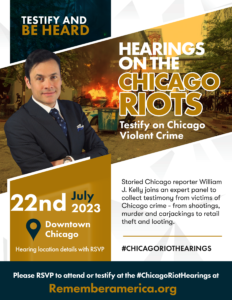